Showcasing four centuries of architectural and urban responses to disaster, the exhibition Creation from Catastrophe ran at London’s RIBA Architecture Gallery from 27 January until 24 April 2016. It traced an imaginary line through time and space, from Sir Christopher Wren’s dramatic reconfiguration of the City of London after the Great Fire in 1666, to various proposals to counter contemporary crises by reinventing cities around the world in the 21st century.

Our design for this exhibition was directly informed by the works included in the show, which demonstrated a tension between authorial, top-down plans and participatory, bottom-up responses to catastrophic events.

Inspired by the regimental masterplans characterising several displayed works, and referencing radical architecture groups such as Superstudio and Archizoom, we transformed the gallery surfaces into a smooth, white and featureless three-dimensional gridded superstructure. To disrupt its uniformity, we carved out volumes into the superstructure for each narrative section of the exhibition. Ultra low-profile aluminium frames made by expert framer Gary Dyson allowed works to be embedded directly into the surface of the grid. Elsewhere, floor-mounted works allowed the visitor to adopt an aerial perspective, common to the architectural masterplan.

We linked sequential spaces with a ramped passageway which journeyed from the first room, in which visitors were surrounded by a white matrix, to the final room, where the ramp rose above the exhibition superstructure so visitors could overlook the whole gallery. From this vantage point, the various rooms suggested an urban topography.

To further echo the exhibition’s themes, our material choices combined the humble and organic with the synthetic and highly polished. Embodying blank potential and a clean slate, the grid was clad in opal white acrylic, marked by thin sections of aluminium. Heavily-refined and processed, these components suggested the artificial imposition of architectural visions onto the urban fabric. In contrast, we clad the rooms excavated from the grid in natural raw cork, a renewable and sustainable resource.

The grid enabled us to produce a materially and conceptually immersive environment for the visitor, which was reflected into infinity by mirrors wrapped around the topmost perimeter of the exhibition space.

“Thank you so much for all your hard work. It has been an immense pleasure working with you and we shall miss your good humour and your presence in the Forum!” 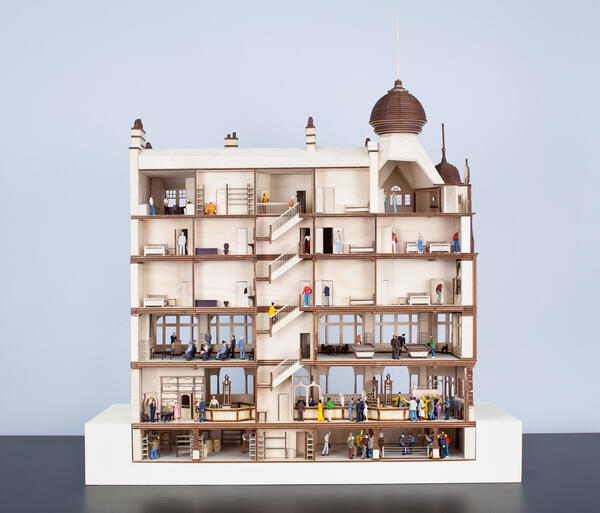 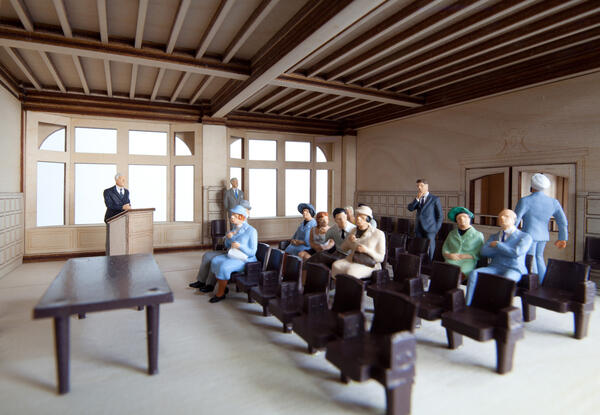