The theme of play informed this weeklong workshop at the Victoria & Albert Museum (V&A), where we challenged 1,000 children to transform an unassuming shoebox into a blank stage set that they could personalise as they saw fit.

Encouraged to venture into the V&A’s collections armed with clipboards, participants were instructed to imagine the museum as a playground and asked to find shapes, patterns and structures that they could translate into swings, slides and seesaws for their stage sets.

Upon returning to the workshop, the children began to design and construct their stage set – complete with starring characters, stage props, and in some cases, theatrical curtains. Upon completion, these were carefully stacked to create a pop-up playground replete with a cardboard roof. The finished project proved to be a physical amalgamation of the creative energy of young minds at play.

A shorter, one-hour-long version of this workshop was also held at the Seoul headquarters of the British Council in South Korea. Titled ‘Design Your Own Biennale’, it challenged a group of 10-year-old children to take inspiration from photography and other associated imagery at the Gwangju Design Biennale, which was held at the same time. The participants then translated their findings into playful installations and structures using various art supplies, found objects and recycled materials. At the end of the workshop, each budding designer and curator presented their proposals back to the rest of the group.

Highlighting the rich interior landscape of children in the context of a museum, both workshops introduced young minds to the practice of situating their works in the overarching artistic discourse while simultaneously framing the creative process as a form of productive play. 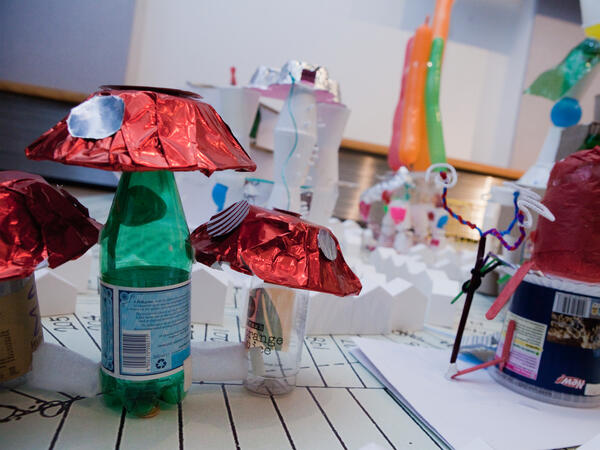